6.2 Communities Select Which Harm(s) to Children to Address

The community-led process begins with the community itself defining which harm(s) to children it is most concerned about and intends to address.

This decision has significant implications for children’s well-being and also enables genuine community ownership. As the communities themselves take stock of what is most damaging to children and decide which harms to address, they increase their motivation and take responsibility for addressing the issues collectively. In most cases, it is useful for the facilitator to help the community focus initially on manageable tasks that can be completed relatively soon. This initial success helps to build the community’s confidence and ability to take on more challenging tasks.

This can be a significant loss for several reasons. If, for example, girls are excluded, the community will likely not learn about girls’ views and the distinctive harms that they face. As a result, the community will be less likely to select the harms that girls see as most important, and the subsequent actions are not likely to be sensitive to girls’ views or issues. Such a flawed, gender-blind process of decision-making would demean girls and help to cement male-privileging values and practices that enable ongoing harms to girls.

Similarly, if the process leaves out people with disabilities, it will not learn about the situation of children with disabilities or be able to benefit from their views, agency, and creativity.

To stimulate awareness about how inclusive community meetings are, the facilitator should ask many different people questions such as the following:

As people discuss such questions, they become more aware that community meetings are not friendly spaces for children to speak up, nor are they fully inclusive. For example, who is excluded from the community meeting in the picture below? 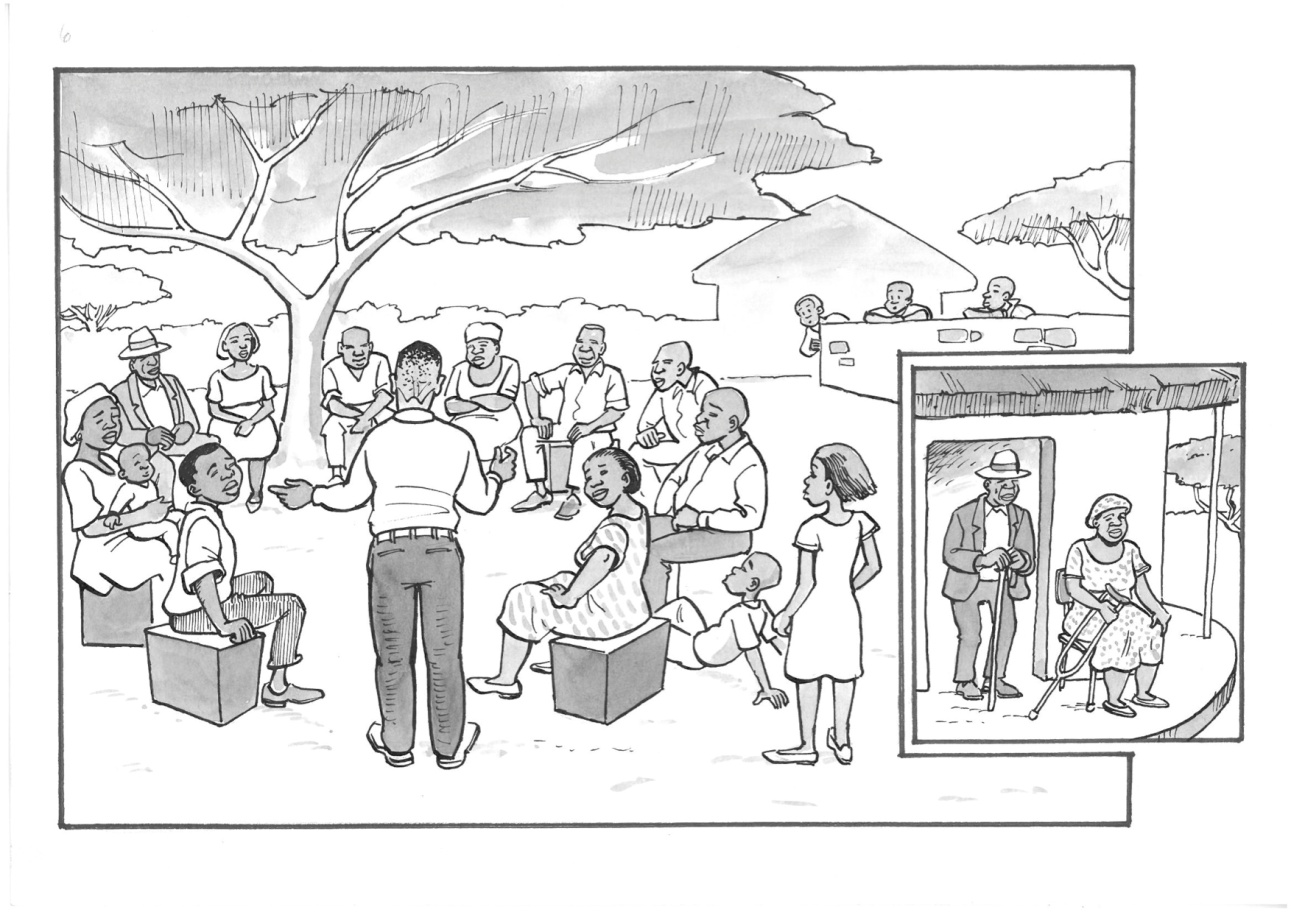 Since the question about options is open-ended, community members are free to make many suggestions. Without favoring particular options, the facilitator helps the community to think through different options with careful attention to feasibility and inclusivity.

Particularly if the community seems uncertain about how to enable everyone to have a voice in the discussion and decision-making, it can be useful for the facilitator to share various approaches that other communities have used, inviting discussion of them, too. This is not an imposition of other approaches since the community still holds the power to decide how it will go about enabling an inclusive process.

As part of developing this Guide and Toolkit, a community-led approach was trialed and studied in Sierra Leone. Read a summary of the case study and what it showed about community-led processes.

In a spirit of co-learning across communities, the approach used in Sierra Leone (see Tool MGM 2) intermixed community meetings, small group discussions, and home visits. The small group discussions were conducted privately with groups of ten or so girls, boys, women, men, and elders, respectively, with the general points from these discussions fed back to the community, without personal identifiers.

Small group discussions create a safe space to talk among peers. This allows girls, for example, to speak openly about issues that they would not otherwise discuss if men or boys were present. The aim is not to bring a “right answer” back to the next community meeting but to share with the community the options that have been suggested and enable a discussion of these options.

Home visits are advantageous since they may include people such as a blind child who stays mostly at home or very poor people who work extra long hours and have little time to attend meetings.

Such visits, however, need to be respectful, supportive, and focused on the views of the participants, without judgment. Developing informal guidelines through participatory dialogue for making home visits could help to ensure that the home visits are safe, ethical, and constructive. Throughout the discussions, the emphasis should be on community dialogue and decision-making. This approach is consistent with the spirit that we all stand to learn from community insights and problem solving.

However, there are many different ways of enabling full participation by people in the community who are typically marginalized, and the approach used in Sierra Leone is not intended to be prescriptive.

A different means of enabling meaningful child participation was used by ChildFund in northern Afghanistan in 2002. Here, ChildFund facilitators enabled a process of child-led risk mapping, in which children drew pictures of their village and identified the places that were dangerous for children. When the children presented their findings via role-plays to their villages, they showed how young children sometimes died from falling into uncovered well holes. Without any NGO encouragement, community members became concerned about the problem, identified pieces of wood, and used the wood to cover the holes that had posed a threat to young children.

This community-led process was galvanized by children’s sharing their lived experiences in a creative means of role-plays. To their credit, the children managed the power relations with adults well by demonstrating respect for their elders throughout the process.

When it comes to enabling inclusive participation, there is no “one-size-fits-all” option, and the local community should take the lead in deciding how to bring forward diverse voices and views.

A key step is to work according to community time. It may take several cycles of large community meetings followed by smaller discussions before agreement is reached on how to enable inclusive decision-making. Or the community may decide to work initially via large group meetings, taking subsequent steps to bring in a wider diversity of people.

Multiple obstacles can arise in developing inclusive community dialogue and decision-making. If movement to include the views and voices of children occurs too quickly, it can upset the local norms and the balance of power between children and adults. Similarly, efforts to include marginalized people can evoke backlash, particularly if there are strong norms related to caste and religion.

As these complexities suggest, the path to an inclusive decision-making process entails slow, social change and requires a patient approach. A good strategy for managers and facilitators is to discuss these and related complexities with respected community members who, together with mentors, can help the facilitator to navigate difficult issues in a contextually appropriate manner.

A significant concern, however, is that the leader’s participation could control or limit the discussion of different ideas. After all, the leader is a very powerful person and is often seen as being very knowledgeable. To disagree publicly with the leader would be inappropriate. People who disagree might stay silent due to concerns about coming under criticism or about what might happen if they fell out of favor with the powerful leader.

The path to an inclusive decision-making process entails slow, social change and requires a patient approach.

As a result, it will likely be difficult to have a fully honest, open discussion among community members if the leader participates in open discussions.

To manage or prevent this potential challenge, it is useful to talk with the leader in advance of the first full community discussions. Having put the problem before him or her, we can then ask for their advice in handling it.

In Sierra Leone, this led a Paramount Chief to exclaim with a laugh that “no one would disagree publicly with the Paramount Chief!” Appropriately, the Chief then suggested that he would not participate directly but instead would receive regular reports and updates on the state of the discussions and planning. This approach simultaneously recognized the authority of his position and also allowed for an inclusive process.

Generating Ideas About and Prioritizing Harms to Children

Once the community has worked out how to it wants to enable an inclusive process, the facilitator may begin asking questions that help the community to select a harm or harms to children to address through community-led action.

This will likely be a slow process that can take several months, since the issues are complex and the community is just getting into the swing of having highly inclusive dialogues. The process also must unfold in two steps, with broader discussion followed by narrowing down and prioritization of the harms to children to be addressed.

These and related questions help participants to think through what they see collectively as the main harms to children and why those harms are significant or very concerning. Frequently mentioned among the latter are the damage to or suffering of children, limits to their well-being and healthy development, or burdens placed on family and community.

Over time, the discussions develop an ecological perspective, without it being named as such. By inviting the views of many different people and enabling the exploration of ideas without lapsing into debates or efforts to find the “right” answer, the facilitator enables an inclusive process, helps diverse people to participate, and promotes enjoyable discussions in which people learn from one another.

This second step may be slow in part because there may be divergent views about the most important harms to children. To build an inclusive process, it is essential to take time and make sure that different points of view receive adequate attention. If particular people feel marginalized at this moment, they will likely step back from or even withdraw from the process, thereby weakening its inclusivity.

It may also take time for communities to get past a focus on poverty as the overarching harm to children. To aid this process, the facilitator may stimulate reflection on the fact that in some poor families, children do well, and in some relatively well-to-do families, children fare poorly.

Over time, though, experience shows that communities will slowly reach agreement on the top two or three harms to children, from which the community will select one or several harms to address.

For example, in Kenya, the communities selected “early sex” as the harm to children to be addressed. Early sex was a priority in part because it related to early consensual sex, sexual abuse and exploitation of children, and early pregnancy. Similarly, some communities in India chose “child marriage” as the harm to be addressed, and they recognized that child marriage was interconnected with “school dropout.”

A strength of a community-led approach is that communities often do not think in terms of the divisions inherent in the humanitarian system. Instead, they take a holistic approach in their actions to address harms to children. In this respect, we have much to learn from communities.

At the same time, it is important to encourage communities (and ourselves!) to be realistic and to not set themselves up for failure. Considerations of possible community actions often find their way into discussions of which harm to address. This can be helpful in keeping an eye on what is practical to accomplish.

For example, in a recent planning discussion in tribal communities in India, a community felt strongly that alcoholism was one of the biggest harms to children, and people wanted badly to address it. However, when they spontaneously asked themselves how they could address it, they realized they had no feasible means of reducing deeply ingrained, widespread alcoholism. This did not decrease their desire to address it, but they learned through dialogue that it would be better to collectively address harms to children that they can likely address in an effective manner.

Similarly, it is useful to help communities recognize that if they try to take on too many harms at once, their chances of success will probably diminish. In light of limited local resources and other constraints, communities are more likely to succeed in their action if they do not take on too much at once and start with harms to children that practically can be addressed through community action.

A good practice in community-led work is to help communities achieve early wins by focusing initially on harms to children that the communities stand a good chance of addressing in an effective manner.